A Long Strange Week It’s Been 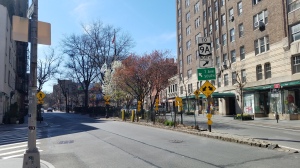 This morning I took my the traditional walk around the block that occurs at the end of shiva. According to Rabbi Peretz Rodman, “The walk outdoors serves two purposes: It announces to the world that the mourner is re-entering the public sphere, and it provides support for the mourner making that transition from withdrawal to engagement in society.” As I walked down Sixth Avenue, turning down 11th Street, I realized that there was no one to reintroduce myself to and there was no one to comfort me. Greenwich Village was quiet. I continued my walk to Seventh Avenue, stopping to stretch my ankles against a building. As I rounded back onto 12th Street, I saw a few people, no one that I knew. As I approached my apartment building, I saw a neighbor, who waved. We recognized each other despite most of our faces being covered by masks.

It seems strange that it was almost a week ago that we buried my mother. There were a few family members in attendance, my brothers, father, nieces in person and nieces on Facebook video, a cousin. The week was filled with a Zoom shiva meeting, phone calls, emails, video chats. I felt the warmth of the many extended family members and friends who have reached out. There were lots of naps and videos. There was even a Zoom memorial for an extended family member on their first yartzeit, the first anniversary of her death. I did take a few walks, but living in the heart of NYC, the threat of the invisible virus transmission is too great.

I remember when my grandmother, my mother’s mother, died. It was the beginning of winter break when I was in junior high school. The funeral was a cold, rainy day. It was that dampness that stays in my memory. I remember that I got sick from being out in the damp and cold. (Yes, I know it comes from germs.) In retrospect, I think my immune system was diminished from the loss. She was my favorite.

Shiva was at my Aunt Minnie’s house. It was always at Aunt Minnie’s. After my grandmother was no longer able to host family events, they shifted to Aunt Minnie’s house. Seders, holiday dinners, and shivas. Occasionally, my mother would host a Thanksgiving dinner or a seder, but generally, they were at Aunt Minnie’s. She had the biggest apartment. She, and my Uncle Herbie when he was still alive, had the greatest Yiddishkeit. I always felt as if I was enveloped when I walked in the door. The food was always plentiful and the most Jewish, whatever the occasion. The family was also plentiful.

As I reenter the world, the real question is, what do I do? We can’t visit my father in his assisted living apartment. There are daily phone calls. The gyms are closed and I am struggling to get into an exercise routine. Did I spend much of the last year getting into shape to allow my progress to fail in this pandemic? Should I just be happy to be alive?

Rodman explains how the mourner is greeted with the words, “May God comfort you among all the mourners of Zion and Jerusalem.” It is also traditional to say these words when someone leaves a shiva call. These words referred to those in mourning for the destruction of the Temple in Jerusalem. As someone who is not in mourning for the Temple, and not interested in seeing it rebuilt, I am in search for the appropriate catch phrase that makes sense to the Liberal Jew.

Traditional mourning rules tell us that the death of a loved one, especially a parent, turns one’s world upside down. Death in the time of Covid-19 in like being being a die, cupped between hands and shaken all about. It’s not just that up is now down. It’s sideways and crooked and turned in multiple directions.