The Third Bridge Table on the End 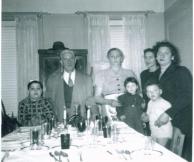 The Weinbaum Seder, before my time

I am the youngest child and the youngest grandchild.  My mother is the youngest of seven girls.  At the seders of my childhood, I was at the end of what always seemed like the longest possible table, my grandmother’s huge dining room table with a few bridge tables attached.  As you can imagine, I said the Four Questions for many years! These were times filled with aunts, uncles, older cousins, and siblings.  And we were all held together by my grandmother, zichrona l’vracha. There was always lots of exotic foods, exotic to my child’s mind, and sweet, Pesach wine, a few sips and I would feel it in my toes. My mother and aunts would inevitably bring us stories of seders past and my grandfather would be remembered. It was as if the people of the past were there, around that table, laughing and singing. I think of these times with great fondness and remember those who are no longer with us. 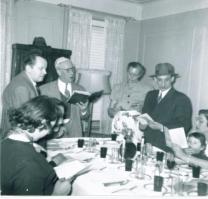 My Grandfather leads the seder, standing next to my grandmother

There is something about memories that brings us closer to one another in joyous times and times of sadness and struggle.  Recently, I was at the wedding of good friends. I was honored to be one of the chuppah holders.  So I had a close up view when my friend spoke poignantly about his dad who didn’t live to see his son stand under the chuppah.  As he spoke, I looked at my friend’s sister and mom and I knew that his telling us about his dad brought his dad to us at the chuppah.

Later in the ceremony, we collectively remembered the fate of the Jewish people throu

gh history as his bride broke the glass.

As Jews, this is the season of remembering.  We just finished Purim where we remember Amalek and our heroes Esther and Mordechai.  At our seders, we recalled  our redemption from Egypt as a people.  Many of us also came together to tell stories with our family and friends.  And we come together as a community to say Yizkor, an opportunity to remember those who have come before us.

Gates of the Season: A Guide to the Jewish Year reminds us that: “memory is a precious gift, for it transforms the discrete moments of our lives and events in history into an unfolding narrative. We become acutely aware of being a part of an eternal people that began a spiritual journey in the distant past with its goal to be realized in the remote future. Through the words and music of the [yizkor] service we become conscious not only of our own mortality but also of the sacred opportunity that we have in our brief lives to perform acts of sanctification which may improve our lot and the lot of humanity.

As we recite the Yizkor prayer we mention in our hearts the names of all who were close to us–grandparents, parents, friends, and relatives . . . . The memorial service is an act of faith that goodness does not die with a person but exists in the memory of those who remain alive.”

Our thoughts also turn to those who lost their lives simply because they were Jews.  Those who were murdered in the Holocaust.  Those who died to build and keep alive the State of Israel.

As Gates of Seasons continues, “Death removes our loved ones from their earthly abode, yet Jewish tradition affirms the faith that the divine spark in every human soul has a permanent dwelling place with the Eternal.  [As we say Yizkor, we remember that] memory is the sacred link between past and future and between time and eternity.”

There has never yet been a man in our history who led a life of ease whose name is worth remembering. — Theodore Roosevelt

No definition for God is adequate or ever could be, but here is a memorable word on the subject from Martin Buber: “When two people relate to each other authentically and humanly, God is the electricity that surges between them.”  –Rabbi David Wolpe

Memory… is the diary that we all carry about with us.  –Oscar Wilde, “The Importance of Being Earnest”

It’s surprising how much memory is built around things unnoticed at the time.  –Barbara Kingsolver, Animal Dreams

Memory is a complicated thing, a relative to truth, but not its twin.  –Barbara Kingsolver, Animal Dreams